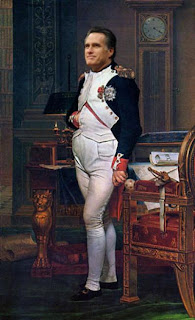 Japan and South Korea always seem worried about how Washington values their alliances. They both believe that Republicans are better friends to these alliances than Democrats. Republicans are less likely to examine the gaps in social and cultural values between the countries in favor of all things security.


God did not create this country to be a nation of followers. America is not destined to be one of several equally balanced global powers. America must lead the world, or someone else will. Without American leadership, without clarity of American purpose and resolve, the world becomes a far more dangerous place, and liberty and prosperity would surely be among the first casualties.

For Japan and South Korea, however, the speech was not comforting. Neither alliance caught his attention:


And I will bolster and repair our alliances. Our friends should never fear that we will not stand by them in an hour of need. I will reaffirm as a vital national interest Israel’s existence as a Jewish state. I will count as dear our Special Relationship with the United Kingdom. And I will begin talks with Mexico, to strengthen our cooperation on our shared problems of drugs and security.

Prior to the speech, the Romney campaign released its team of foreign policy advisers. A lot of huff and puff from a lot of short men it seems.
Posted by Armchair Asia at 11:23 AM No comments:

Too Hot to Fish

I noted it was not much of a surprise as it was signaled for months. Noda is an articulate politician who is respected by business and financial experts with real grassroots origins. He is not a controversial choice.

His election further defangs the DPJ's dark prince Ozawa and shifts the party center right. The focus of his tenure will be the domestic economy and consensus building with foreign affairs put aside much to the frustration of the U.S.

If anything, Noda's statement that he did not consider those Japanese convicted of war crimes to be criminals, helped rather than hurt his candidacy. It established his conservative bone-fides, created a bridge with the LDP, and set himself up for a small confrontation with China. Noda and others clearly noticed that Prime Minister Kan's tough stance against China proved to be popular. It dramatically, albeit temporarily, spiked Kan's polling numbers.

But most interesting, I thought, to my listening audience--Vatican City, Rwanda, and Kiribati--would be mention of how Mr. Noda described himself. So I concluded:


What can you say about a prime minister that wants to be compared to a fish? A friendly, adaptable, hardy fish. A bottom-feeder no less.

The fish in question is the Dojo Loach. According to Loach Online:


This somewhat "bulletproof" aspect of the fish does not mean that corners can be cut in its care in the aquarium though. Big fish such as this require excellent filtration and frequent water-changes.

They are a very peaceful fish and can become quite tame, often feeding from their owner's hand. They are also quite long-lived, and if cared for well can become quite a Pet. Because of their sociability, they should not be kept singly as they like to sit in groups when at rest. They will often sidle up against one another and feel one another with their barbels.

I do not make this stuff up. This is science.

Oh yes, the Asian Loach is an invasive species in the West.
Posted by Armchair Asia at 11:28 PM No comments: 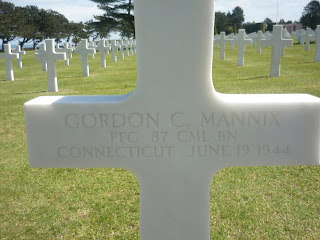 I don't know if my mother ever wrote him. But finally, by some fate, part of her visited him and said goodbye.
Posted by Armchair Asia at 7:34 PM 3 comments:

From the flight deck of the USS Essex

Lieutenant Yoshinori Yamaguchi* pointed his Yokosuka D4Y3 (Type 33) Suisei at USS Essex (CV/CVA/CVS-9) on November 25, 1944. He slammed onto the edge of the flight deck causing an inferno that killed him and 15 sailors, half of whom were African American.

The Kamakazi attack, however, did not sink the aircraft carrier. After quick repairs, the USS Essex went on to participate in the Battle of Okinawa and conduct raids against the Japanese home islands.

Today’s USS Essex (LHD-2) is an amphibious assault vessel, the fifth ship named after Essex, Massachusetts, and one of the first US Navy ships to come to Japan’s aid after the devastating earthquake and tusnami.

According to the US Navy, the Essex was deployed off the northeastern coast of Honshu and was involved in relief activities in the Sea of Japan off Akita Prefecture. Helicopters from the ship helped deliver relief supplies to quake and tsunami survivors along the northeast coast of Tohoku.

As part of the US military’s humanitarian aid mission, Operation Tomodachi, the Essex has been instrumental in restoration work on Oshima Island, located off Kesennuma, Miyagi Prefecture. The Essex helped restore power to the isolated island and deliver heavy machinery and other items to restore the destroyed port facilities.

A Yomiuri Shimbun reporter and photographer (essential to every Marine landing party) spent the day with Marines from the Essex in early April. The journalist accompanied them as they began a week-long mission to offer assistance where needed on the island.

He quoted SDF Master Sgt. Masanori Ide, who is stationed aboard the USS Essex as a senior officer of a Japan-U.S. bilateral coordination center, who said, "They didn't do it because of an order, but out of a desire to do something for friends."

Capt. David Fluker, USS Essex commanding officer, said the relationship between Japan and the United States had grown even stronger in the weeks since the quake.
I surely hope so.


*This may not be the young pilot, as there is some debate as to whom he was, as is discussed in this BOOK REVIEW.

Posted by Armchair Asia at 7:25 PM No comments:

What are you doing wasting time reading this blog?
Do some good, give something of yourself.
Buy this innovative, one of kind book to support disaster relief in Japan.
Otherwise, you are just another wanker...
Posted by Armchair Asia at 11:50 AM No comments: 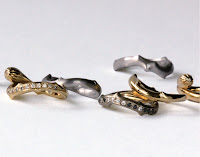 Among the 11 fashion trends spotlighted in February’s Elle is jewelry by Tokyo’s Inoue Hirotaka. He is getting a lot of mention lately, and at the very least, his publicist is determined to make him the next big thing. Although Tokyo is the place for innovative clothing and fashion, I frankly can’t recall any big name, must-have Japanese jewelry designers.

Maybe Hirotaka and his darker-side-of-nature inspired gold and platinum ornaments will change this.

Elle featured a gold hear shaped pendant that opens in the middle into a pointy-toothed mouth. I wish I had a larger picture to share with you, but this is the best I can do. Is the message that love bites or the wearer has a hungry heart or someone should be careful about touching another’s heart?

Some of his pieces are skulls and snakes. They are an expensive, whimsical nod to the latest grunge/punk/goth/girl with the dragon tattoo trend (I plan to someday turn up at CSIS dressed like that, but that is for a later blog). He is better when he is serious about nature's influence instead of trying to reinvent it. He is also better when he avoids the skulls as if he were Alexander McQueen East.

Not sure I would want that toothy necklace for Valentine’s day (yet it is memorable), but something Hirotaka would be nice. Although he seems a bit trendy, and his work might get dated quickly, I am simply weary of things from Tiffany. Somehow I have been given every Tiffany item that I do not want and do not like. Hirotaka still has room for growth and experimentation.

Among Hirotaka’s more imaginative nature-shaped pieces are his thorn rings made of gold or platinum and adorned with tiny diamonds. That is my choice of a thoughtful gift. Every relationship is thorny, far from perfect, but precious in its own way.
Posted by Armchair Asia at 11:15 PM No comments: 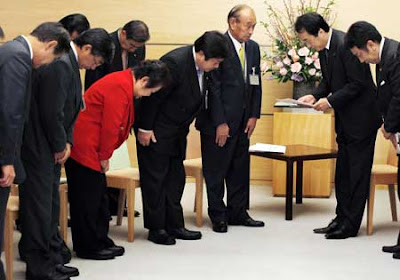 Okinawa Gov. Hirokazu Nakaima (3rd right) and city mayors from the southern Japanese island of Okinawa bow after handing over their request to move the Futenma US Marine Corps Air Station off the island of Okinawa to Japanese Prime Minister Naoto Kan (2nd right) and Chief Cabinet Secretary Yukio Edano (right) prior to their meeting at the prime minister's official residence in Tokyo Tuesday. Photo: AFP

The slight bow and long stare of Gov. Nakaima, says it all. Then again it might just be the photo selected by China's Global Times. Either way, Futenma is far from being a done deal.
Posted by Armchair Asia at 9:26 PM 1 comment: