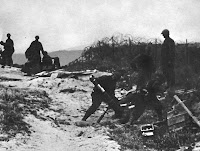 Gordon Mannix died on the road to Montebourg. He had survived storming Utah Beach on D-Day and two weeks of fierce fighting against the Germans near the beaches of Normandy.

On June 19, 1944, he was one of 12 soldiers of Company C killed when an ammunition truck exploded as they fought their way east. Pfc Mannix was a member of the Army’s famous 87th Chemical Mortar Battalion that provided devastating fire power in support of the American infantry liberating Europe from fascism.

The 19-year old aspiring artist from Plainville, Connecticut was awarded a Purple Heart and buried at the American St. Laurent Cemetery established by the U.S. First Army on June 8, 1944. It was the first American cemetery on European soil in World War II and is now the Normandy American Cemetery and Memorial.

No, I am not related to this soldier buried long ago in France. But our lives intersected a few weeks ago as I finally dug through the boxes of letters and papers my mother left behind when she died 30 years ago this month. Since Christmas, this is how I have been spending my free time: piecing together my mother's younger days and learning about the people she knew.

I am supposed to be reviewing and sorting the last of my parents effects. It is a job I avoided for decades. Finally, the boxes landed in the middle of the living room and the mission, I told myself, was to find ephemera to put on Ebay.

Thus, how I found a 1943 Christmas card to my mother from Pfc Mannix who was stationed at Camp Rucker, Alabama. I put it aside as a curiosity that I might, as so many other things she saved, put it on Ebay. Then in another box I found a letter from one of her friends from Plainville where she had her first teaching assignment. The letter, barely seven months after the holiday card, contained a yellowed obituary for Gordon Mannix.
Suddenly, it made sense. I understood why she saved the Christmas card, and possibly other letters from Mannix that I likely tossed before I knew their significance. She was his high school art teacher and she had discovered an unusual talent among her first classes. He had even won an art scholarship to college, but was drafted before he could accept it. I regret very much now tossing out the Plainview High School’s yearbooks that she had so carefully saved.

The information about how he died and his battalion I found on the Internet. There is an excellent day-to-day history of the 87th and an admiring account of these unsung heroes, The Mortarmen

, 2005. A small memorial to these men can be found at Aberdeen Proving Ground on the edge of the parade ground near the post chapel.

My mother never mentioned Mannix to me. But often, after watching the war news on TV, she would sigh on how war was such a waste, so many talented young men were killed. She was never specific, but I am sure that as a young art teacher during the war years, she lost many students.

If I ever visit Omaha Beach and the Memorial, I will go "see" Gordon Mannix. For now, I will keep his Christmas card.

As it is written in the Memorial Chapel in Normany, “think not only upon their passing, remember the glory of their spirit.”
Posted by Armchair Asia at 10:53 PM