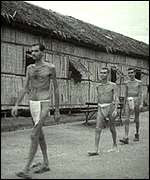 A Reader asked my opinion. He wondered what I thought of an article by Christian Caryl that appeared on June 28th on Foreign Policy Online entitled, “Unfinished Business: For 65 years, Japanese corporations have escaped responsibility for abusing American POWs during World War II.”

The Reader must not be from Washington or Tokyo, as those folks never ask for my opinion or thoughts. My daughter sometimes asks, but only to make sure that she should do the opposite of whatever I advise.

Caryl* writes of a lingering historic injustice by Japan. It was not one Japan inflicted upon its Asian neighbors. It was not even one perpetrated by Imperial Japan’s military. It is a war crime against American prisoners of war, military and civilian.

Before I comment further, I suggest that the Reader pair the Caryl article with one by Lisa Belkin in July 4th The New York Times Magazine, "Why Is It So Hard to Apologize Well?".

As Caryl noted, many of Japan’s well-known companies, such as Mitsui, Mitsubishi, Kawasaki, Hitachi, Sumitomo, Toshiba, and Nippon Sharyo, ruthlessly used thousands of American POWs as replacements for the Japanese workers in their mines, on their docks and in their factories, in order to keep their business profitable during WWII.

Their profitability was more pronounced due to their failure to pay wages for the labor performed and to provide humane living conditions for its unwilling workers. The result was that more than 40 percent of the Americans captured by the Japanese perished due to abuse, malnutrition, disease, execution, forced labor in dangerous situations, and transport to Japan in unmarked freighters known to survivors as “Hell Ships.”

Surviving veterans of the three and a half years of slave labor have been waiting decades for an apology from those companies that used and abused them. Both American and Japanese courts long ago ruled that these Japanese companies have no financial or legal responsibility toward the POWs.

With the excuses of legal claims and compensation removed, the POWs thought that the Japanese companies would naturally move to apologize. These giant, global corporations all do extensive business in the United States benefiting from many government contracts. They all have statements of corporate responsibility claiming that they respect human rights.

Yet these same companies continue to ignore the former POWs, who are saying in essence, "you have a moral obligation to offer us a sincere apology, do so, and we will accept it, then we can both move on." As Belkin writes, an apology when done well “can heal humiliation — by lifting anger and guilt and allowing splintered bonds to mend.” Further, apologizing can “be good for our collective soul, allowing those who are wrong a chance to repent and those who have been wronged a change to forgive, right.”

A successful apology is “an expression of regret, an assumption of full responsibility. It also helps to put forward a plan for preventing similar mistakes in the future.” This is the case for France and Germany, which have both established foundations to memorialize their victims of the Holocaust and slave labor.

Germany’s Remembrance, Responsibility, and Future Foundation is funded equally by German companies and government. It’s focus is on the victims of National Socialism’s forced and slave labor. Japan’s total lack of acknowledgement of its use of slave and forced labor is an embarrassing contrast.

Belkin finds that “When an apology fails, two things are lost--the victims are not asked for forgiveness, nor are they given a chance to grant it. Being asked to forgive restores dignity to the injured. Granting forgiveness is a step toward moving on.” This is true for Japan’s equivocal or non-existent war crimes apologies.

Everyday Nippon Sharyo railcars roil past the edge of the Maywood, Illinois Veterans Memorial Cemetery. Eighty-nine Maywood soldiers were part of the infamous Bataan Death March. Only 43 returned home alive. One even slaved for Nippon Sharyo.

Soon Nippon Sharyo, now owned by JR Central in Japan, will bid on multi-billion dollar government contracts to build high-speed trains in the United States. So far, they have not said a word about respecting the dignity and memory of the American veterans they once enslaved. Also soon, the last of the American POWs of Japan will pass on.

Saying nothing, ignoring complaints, and “looking forward,” is a very Japanese tactic to avoid responsibility and confrontation. It makes Americans uneasy and undermines trust. More, the non-response is viewed as bad as a botched apology. Belkin says these not only taint “the act of apology but the ability to accept an apology as well. And that is unforgivable.”
Unforgiveable.
*I must confess that I do know Mr. Caryl. We had an appointment, which he forgot and missed. He did not know I was used to that sort of thing, so he sent flowers. They remain the most beautiful and unexpected flowers I have ever received.
Posted by Armchair Asia at 12:53 AM